Though there are very few users of Apple products and devices in Zambia there is still news for them. Facebook Messenger has now a new Apple Music Chat extension been rolled out benefiting users to link to Apple Music content. The Messenger service will allow users to share songs directly within the Messenger app.

The feature begun to roll out yesterday 5th October 2017 though Apple had announced earlier in April of 2017 at their F8 developer conference of such plans of a chat extension. 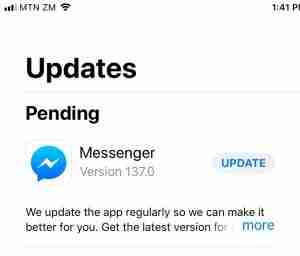 Though Facebook has not mentioned anything there is an update of 137.0 update available in the App Store. It is a good idea to have the update done.

Despite the announcement we at Lensesview in Zambia haven’t seen the extension yet but online testimony like from Engadget says they have seen it.

Also Apple Inc rolled out iOS 11.0.2  which assumes to fix the nightmare the iOS 11.0.1 caused on some iPhone Users. According to Apple the following issues have been addressed;

Facebook Messenger Secretly Gets Dark Mode. Here Is How To Enable It

Apple roll out first update to iOS 11.0 barely a week after release

How To Open Messenger On Your Computer Without Opening Facebook

Microsoft Kaizala Pro To Be Included To Office 365 Service