What is a Social Credit System

A data gathering system using comprehensive monitoring of human activity and behavioural analysis to produce a social history and offer a human social credit score. It’s gathering enough data about your citizens for a good purpose.

According to a definition at Wikipedia.

The Social Credit System is a proposed Chinese government initiative for developing a national reputation system.

Social Credit System, has been reported, to be intended to assign a “social credit” rating to every citizen based on government data regarding their economic and social status. 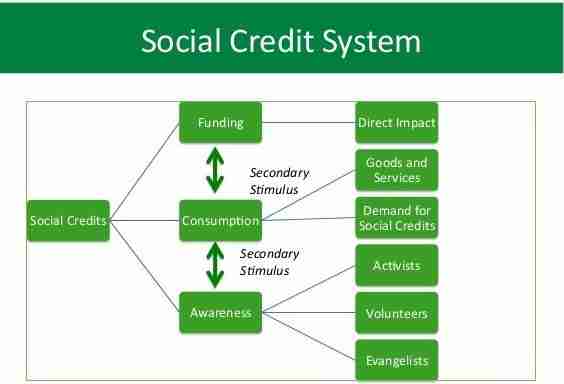 Brandt Dainow added a few lines to the proposed system.

2)      Ensure everyone gets treated fairly all the time.

3)      Ensure all humans act in accordance with their society’s highest ideals.

This may look like it has nothing to do with the internet, but that’s not the case.  Systems to enforce this are under active development and government sponsorship.

Comprehensive monitoring of human activity, in the home and in public. Combined with facial recognition to identify people, linguistic and behavioural analysis. Also some clever human supervision These can monitor human activity for honesty and conformance with social ideals.

Boiling Down the ideals

People can be encouraged to act accordingly by denying access to basic social services like medical treatment and education for offenders, or making access to some services dependant on people having built a positive “social history”.

The same rules can be applied to businesses as well. This program is in active development in China.  It’s a major, public, government program.

Social Credit System is about Government spying on the citizens. Collect enough data through public surveillance. Greatest culprit to amass data about citizens is the social media. This information is then used to guide national policy-making and government decisions.

To me this social credit sounds dangerous.

A controlled state not only infringes on citizens’ privacy, but what’s more detrimental is that it takes away the freedom of individual choice and lifestyle.

But again most countries are using surveillance and many other systems that gather information about citizens.

Whose Zambian phone number is on the Pegasus spyware list?

What is Azure Active Directory

Look At These 8 Aspects When Choosing Your Trip Place
Posted in Internet, Security, Uncategorized and tagged Social credit system, Surveillance
← Where is the GOtv Decoder IUC locatedWhat is IMEI Number and how to find it →