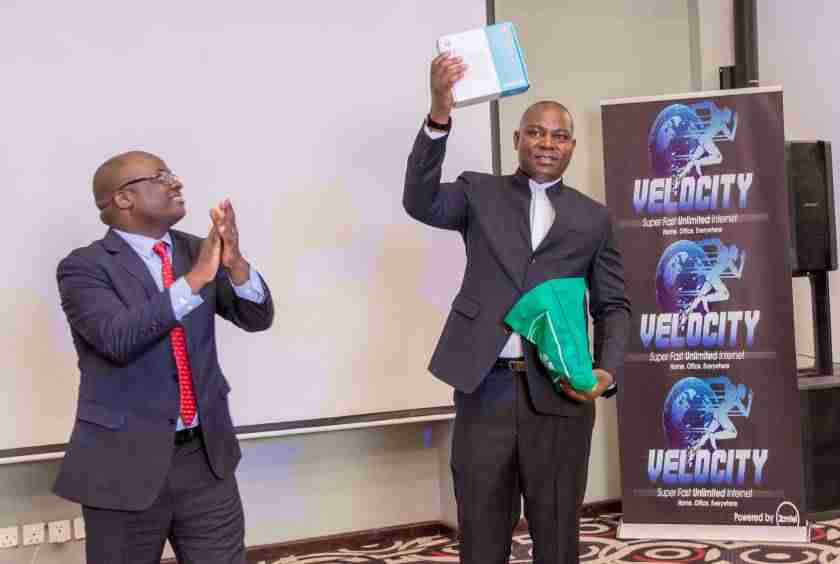 Velocity is Wi-Fi to the Home (WTTx) brand which offers unlimited internet, a first on the Zambian market and uses LTE technology.

The service is available on Routers and MiFi. Velocity comes with uncapped internet for a 30-day validity period with superior data speeds.

It was launched Monday evening at a glitzy event held at the Radisson Blu Hotel in Lusaka which was officiated by Transport and Communications Minister Hon. Mutotwe Kafwaya.

And Hon. Kafwaya commended Zamtel for the innovation saying the arrival of Velocity will significantly improve people’s access to the internet which will go a long way towards the attainment of the universal coverage agenda.

“This innovation by Zamtel is firmly in line with the Seventh National Development Plan and Vision 2030 which places emphasis on access to Information Communications Technology services for all. The universal access agenda will only be realized when Internet Service Providers (ISPs) such as Zamtel keep launching innovative products such as Velocity,”

Meanwhile, Velocity Team Leader James Earle said Velocity will be offering the most affordable unlimited wireless internet on the market.

“I am sure we all have experienced, at one point or another, the inconvenience of having your data depleted whilst you are in the middle of a critical assignment or watching an entertaining movie. With the launch of Velocity such experiences will be a thing of the past as it will offer unlimited wireless internet at very competitive price plans,” Mr Earle said.

“Velocity is a response to a growing number of customers that need always-on high speed internet in their homes and offices thereby enhancing convenience,”

“Velocity is a gateway to a world of endless possibilities, whether its social networking, music and video streaming or simply online research. We believe this is a product that will transform our customer’s lives at affordable costs,” he stated.

The new LTE package is designed to be used like a home broadband connection but delivered over Zamtel’s mobile network instead of a fixed line connection.

The biggest benefit, aside from being affordable is that one does not have to wait for fibre to arrive in a specific area to access Velocity.
Velocity requires only a router and a SIM card to give multiple users of up to 32 within the home or office instant connectivity to high-speed internet.

Customers using Routers can choose from a range of five price plans, starting at K349 per month as entry level option offering 3Mbps to the Unlimited Ultra package which offers 20Mbps at K1,650.

Why you should not buy Zamtel Velocity 20mbps